How Do the Literary Devices Construct Meaning in “the Visit”?

How do the Literary Devices construct literary meaning in “The Visit”?

These are some of the prolonged literary devices are symbolism, archetype, foreshadowing, characterization, and the setting. Symbolism is a great example because it has a direct relation with money. In pages 14, 46, and 51 show how Guelleners want colors yellow and gold to be present in their daily lives. This reflects in how the Mayor’s speech is at the “Golden Apostle”, how everyone begins to buy “New yellow shoes”, or how the policeman has a “Gleaming new golden tooth”.

GET A BETTER ESSAY OUR TEAM IS READY TO WRITE
YOUR ESSAY ON How Do the Literary Devices Construct... JUST FROM $13/PAGE

This anxiousness from the Guelleners to have new possessions in yellow and gold whenever they have the opportunity to do so symbolizes a deep everlasting obsession for money that’s capable of any type corruption. Moreover, archetype is what drives Claire because the reason for her return to Guellen is her quest for revenge against Ill. Page 39 is an illustration of Claire’s pursuit for revenge, Claire says, “ You decrepit…now I want accounts between us settled. A moment ago you wanted time turned back, in that wood so full of the past, where we spent our young years. Well I’m turning it back now, and I want justice. Justice for a million”.

It’s clear throughout the book Claire wants to get back at Ill for all the suffering he caused her, but the fact she’s using money to achieve it contributes to the production of the main theme. Claire’s will to kill someone is revenge, not justice, and the action of offering a million for Ill’s death, buying the Lord Chief Justice into her Butler, and using money to track down the blind pair, is a clear signal of how money can corrupt anything, even the law and peoples’ moral principles. Also, foreshadowing is a literary device that creates a huge impact on the mood of audience, thus it mounts tension about what is going to happen.

In page 24 Claire says, “… In the meanwhile have the luggage and the coffin put in the Golden Apostle…Yes, I brought a coffin with me. I may need it. ” The suggestion someone, Ill, is going to die is an example of how Claire is so convinced that money can corrupt anything, and the fact that Ill is killed, shows how the 1 million pounds did corrupt peoples ideal and morals. All in all, it can be observed how these extended literary devices mold pieces of the main theme and are all connected towards money’s ability to corrupt. In addition, characterization is used for many characters.

It is used to show how the people in the town are expecting for Ill to die by buying everything on account, or how Ill is looked up to at the beginning, then disliked. For instance, in pages 18 and 19, Claire says, “ You’re simpleton. I want to pay this little town a visit. What d’you expect me to do, hop off your express train?… Boby, give him a thousand. ” In page 29, Claire says, “I’ve grown into hell”, in page as well in page 31 when asked by Ill:”Clara, are you all artificial? ” she replies, “Practically. My plane crashed in Afghanistan. I was the only one who crawled out of the wreckage. 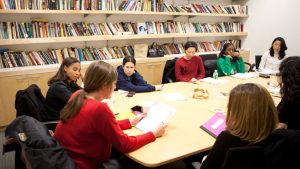 Even the crew died. I’m unkillable. ” These quotes are techniques that are used to describe a character; in this case it can be observed Claire is selfish, arrogant, racist, ruthless etc. Characterization gives lots of meaning to “The Visit” because it is used on every character, thus giving every character a specific role allowing the story and main theme to be formed in the play. Also, it shows how certain characters with specific ideals and attributes are changed such as the mayor, due to the fact of that it can be seen how characters change their personality since Claire’s one million pound offer.

This change in people’s character again contributes to the main theme, and gives meaning to it. Furthermore, the setting is a fundamental literary device which forms the main theme and gives meaning to “The Visit”. This is because the setting paves out the environment and situation in which Guellen is in from the beginning of the book. All throughout Act 1 the reader is given the idea of how poor Guellen is and everyone is so humble and local.

For example, how the train no longer stops in Guellen, how people only buy cheap local brands at the shop and not imported, how they accept Ill as dead for Claire’s one million, how Ill is the most popular personality. These examples all show how the town functions, and how they are desperate for money and are willing to commit a moral crime in order to receive this money. The setting in the “The Visit” gives meaning to the play because it fundaments how and why Guellen is the way it is and allows the reader to understand the specific effects Guellen’s history plays in the decision making, once Claire offers the one million ounds. So, literary devices also give meaning to “The Visit” because they lay the base for the play and how it develops. Finally, literary devices give meaning to “The Visit” because they comprise the main theme, which is money can corrupt anything. Literary devices give meaning by creating the bases of the play, and forming the main theme in wide number of ways. Literary devices are the details in the play that hook’s the audience into the comi-tragedy.